With atrial fibrillation (AF) and related illnesses affecting two million people in the UK and costing the NHS £2.2 billion each year, find out how AliveCor’s Kardia™ has overcome key challenges affecting delivery of care and had a life-changing impact for patients.

Heart arrhythmias are reportedly one of the top ten reasons why people are admitted to hospital.

Certain arrhythmias can cause sudden cardiac death, killing 100,000 people in the UK annually. According to the Arrhythmia Alliance, 80 per cent of these deaths could be avoided through better diagnosis.

Atrial fibrillation (AF) is the most common heart rhythm disturbance. Affecting approximately two million people in the UK and Ireland, it is responsible for a third of all strokes. AF and AF-related illnesses cost the NHS a reported £2.2 billion annually; a cost that is expected to rise as the incidence of AF accelerates.

Challenges affecting the delivery of care

AF can be hard to detect as symptoms, including heart palpitations, may be mild or non-existent. If a patient has symptoms that may point toward an arrhythmia, they may be referred to Cardiology for investigation. The patient could then be issued with a 24-hour or seven-day recorder. These are often poorly tolerated due to the complexity of self-fixing ECG stickers to the chest, and require repeat visits to the hospital for download of any captured recordings.

The standard for rhythm assessment has a number of key issues; first, it is only a snapshot of a moment in time, not necessarily capturing the time of symptoms and potentially missing the arrhythmia completely. Second, it may be up to six weeks before the patient receives the results of their diagnosis. 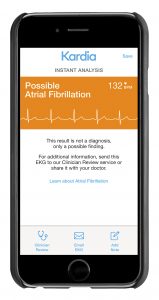 AliveCor’s Kardia™ is the world’s first mobile ECG that instantly analyses and interprets heart recordings, with the ability to detect AF on the spot. Kardia™ Mobile can be embedded on the case or used adjacent to most smart phones (Apple or Android), allowing users to capture a heard recording anytime, anywhere. Results are analysed immediately, and can be shared with a doctor for instant diagnoses.

AliveCor’s Kardia™ has received glowing appraisals from patients and consumers thanks to its life-changing impact.

Patient Diane Fairclough commented: “I love my AliveCor Kardia™ and can’t praise it highly enough. It’s so quick and easy to use and always close to hand. Since having my AliveCor I feel in control and very reassured.”

Driving adoption across the NHS

Kardia™’s innovator Francis White – an NHS Innovation Accelerator (NIA) Fellow – has, over the past year, focussed on raising awareness of Kardia™ amongst GPs, CCGs and the public directly and via clinical and patient-charity advocates. Another focus has been easing access by making Kardia™ available via the NHS supply chain. Francis has also worked with primary care sites where there is readiness to redesign and test an ‘earlier intervention’ AF care pathway, and has been building the case for the device through evaluation of the economic benefits of using Kardia™.

Since being part of the NIA, AliveCor’s Kardia™ has recorded 1.3 million electrocardiograms (ECG) across the UK, and a total of 33 NHS providers and commissioners are now using the device. West Coast CCG is creating a Local Commissioned Service (LCS) for the AliveCor Kardia™ in primary care for the diagnosis of palpitations; whilst the device was accepted as one of 11 innovations being tested within the Care City Test Bed in north-east London, which will evaluate its impact within a population of over one million people.

Impact on the healthcare system

Cardiologists and GPs using the device as routine diagnostic have reportedly been delighted that the AliveCor Heart Monitor captures a clinical-grade ECG rhythm strip within seconds, without the need for a cumbersome 12-lead ECG machine. The monitor increases the speed of diagnosis which is particularly valuable when staff resources are limited.

Doctors also report that the AliveCor Heart Monitor facilitates patient education. Patients have been impressed by the convenience, intrigued by the technology, and empowered and motivated to better understand their condition. Many begin to notice symptoms and triggers of irregular heart rhythms more easily. 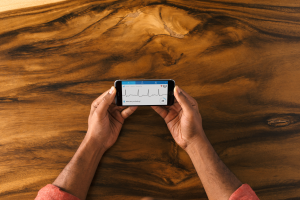 Francis White is the innovator behind AliveCor’s Kardia™. In 2015, Francis was accepted as a Fellow for the NHS Innovation Accelerator (NIA); a nationwide programme run by NHS England and UCL Partners (one of London’s three Academic Health Science Networks) in partnership with the 15 Academic Health Science Networks across England. The NIA supports the best evidence-based innovations that improve health outcomes and reduce cost to give more patients and clinicians access to the latest products, services and technology. An additional eight Fellows will be recruited during summer 2016 to join the NIA.