Hospify announced that its free, simple and safe medical messaging app has become the first such platform to be made available in the official NHS Apps Library. After more than a year of rigorous technical testing and assessment, the NHS organisations behind the Apps Library (which include NHS Digital, NHS England, the Department of Health and Social Care, General Practitioners, Public Health England, NICE, the MHRA, and the CQC) have approved the app for use by any professional or patient across the UK’s health and care system.

Hospify, which is available on both iOS and Android devices for free, provides a simple yet powerful tool for clinical professionals and patients looking for a userfriendly, compliant and convenient alternative to unsafe, marketing data-driven consumer apps like WhatsApp and Facebook Messenger.

Surveys suggest that more than 500,000 NHS staff are already using these kinds of non-compliant consumer apps to communicate sensitive patient-related information while at work. As NHS provider organisations scramble to meet Department of Health and Social Care requirements to phase out the use of pagers and fax machines by the end of 2021, Hospify offers a simple cost-effective solution to the compliance and data security concerns created when health care professionals try to use consumer messaging apps to replace these legacy systems.

In its journey to being listed in the NHS Apps Library, the Hospify app underwent an exacting assessment process to ensure its safety and efficacy in seven key areas.

The free Hospify app offers similar functionality to popular consumer messaging apps such as one-to-one and group messaging, received and read receipts, and unlimited text and photo messages, with additional features to protect privacy such as a built-in six-digit passcode, the masking of personal details such as phone number or email address, and no harvesting of behavioural or other metadata that could be resold for marketing or advertising purposes.

All messages on the free Hospify app are not only end-to-end encrypted but are deleted from Hospify’s UK and EU-only cloud servers after use. They are then only stored, still encrypted, on the user’s mobile device, and even here are automatically deleted after 30 days. Crucially, message notifications do not show sensitive
message content on the phone’s home screen or share photos with the in-phone gallery, two other major source of data privacy failure.

In addition to its NHS App Library approval, Hospify has also been awarded the prestigious quality mark issued by ORCHA, the NHS England and NHS Digitalapproved app reviewer. The app has received some of the highest ratings given out by the review body, scoring 89% for the Apple version and 90% for the Android
version of the app. 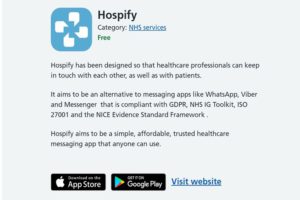 Hospify has already been downloaded by thousands of healthcare professionals. It is min daily use at over 100 hospitals and other clinical sites across the country, where it is helping improve data compliance by encouraging clinicians to stop sharing sensitive health data using WhatsApp.

Multiple NHS Trusts, including Lincolnshire Community NHS Trust, Maidstone & Tunbridge Wells NHS Trust and South Tyneside NHS Trust have signed off the app for use by their employees.

For clinical teams and organisations, Hospify also offers a premium version of its service. Called the Hospify Hub, it features an online admin portal for onboarding staff, a web app that syncs with users’ phones, broadcast messaging/paging with document attachments and a survey and data collection tool.

CEO James Flint said: “Being on the DigitalHealth.London Accelerator Alumni programme has really given us the confidence and support to establish Hospify within the NHS. We’re delighted that NHS Digital has seen fit to publish Hospify in the official NHS Apps Library, signalling that it is appropriate for use right across the health and care system. We’re also incredibly proud that Hospify is the first – and so far, the only general-purpose messaging app to be given this stamp of approval for use by both medical staff and patients. Being on the programme is an important and significant part of our story so far.

“The rise of the coronavirus is underlining the growing importance of telehealth in general and digital clinical communications in particular. At a time when the negative effects of poor data privacy, unsolicited data harvesting and aggressive behavioural targeting are dominating the news agenda and undermining the way our society works, it’s fantastic that the NHS has taken this positive step to stem the erosion of privacy as both healthcare professionals and their patients begin to rely increasingly on their mobile devices for the provision of care.”

CTO Neville Dastur said: “With Hospify, any health professional or patient can now be confident that they can communicate safely and quickly with colleagues and peers with all the ease and efficiency of the best consumer messaging apps, but without any compromise to their data or privacy.”