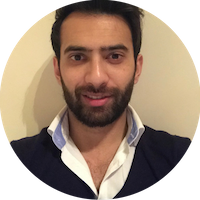 Saquib is a Senior Psychotherapist in the Grenfell Health & Wellbeing Service with 10 years of experience working in NHS Primary Care and Mental Health. Saquib has 4 years of experience of working within digital health care and has presented his work at international conferences and aims to bring this experience to the Grenfell Health & Wellbeing Service (GHWS) with the aid of the Fellowship programme.

Problem: Saquib is aiming to increase access to therapy for groups who are underrepresented at present within the service for example, 18-25s and BAME men. Saquib also wants to increase his reach to a bereaved international cohort of patients who currently are not being treated.

Solution: Saquib has identified a solution at present which is to use a web app and/or mobile app that allows him to use video conferencing, text chat and audio calls with prospective patients.

Scale: The Grenfell fire has been estimated to have affected 11,000 people, who predominantly reside within a 0.5 mile radius of the tower however there are also those affected who live outside of this radius within UK and abroad who Saquib wishes to target using the digital intervention.

Desired impact: The project aims to increase access to specific cohorts of the affected population to the service whilst effectively treating their psychological distress which would be measured using psychometric outcome measures.

Progress to date: During the time that Saquib has been on the Fellowship programme, he has delivered the project with accompanying documentation to support the innovation. The innovation has been scaled across the team and the Trust. When Saquib started in the programme no-one was using it. Now they have a waiting list of patients wanting to access it and are in the process of allocating them to therapists accordingly. Initially it was earmarked for the Grenfell team, there are now plans to expand access to the CYP, Outreach and IAPT teams – discussions which Saquib has led.

“I joined the Fellowship programme because I had become involved in digital, had an interest in digital mental health and it seemed like a natural fit following a recommendation from an alumnus.

The elements of the programme that created the most value for me were: the diverse nature of the cohort, and being able to network with different professionals at different stages of their careers. Gaining different perspectives on the problems I was facing in my project. The session on Difficult Conversations helped me a lot with some challenging conversations I was having at the Trust. My mentor was very helpful.

Overall the Fellowship has helped me to become more assertive in my capacity of taking the lead role on the project. The badge of the Fellowship has given me permission, and I now have the title of ‘digital lead’. It has had a positive impact on my current role. The networking has been good, and I have become more active on Twitter which has helped to open new avenues. Coming out of the Fellowship programme, my ambition is to climb the ranks within the NHS. The programme has opened my eyes to broader opportunities.”

Any cookies that may not be particularly necessary for the website to function and is used specifically to collect user personal data via analytics, ads, other embedded contents are termed as non-necessary cookies. It is mandatory to procure user consent prior to running these cookies on your website.